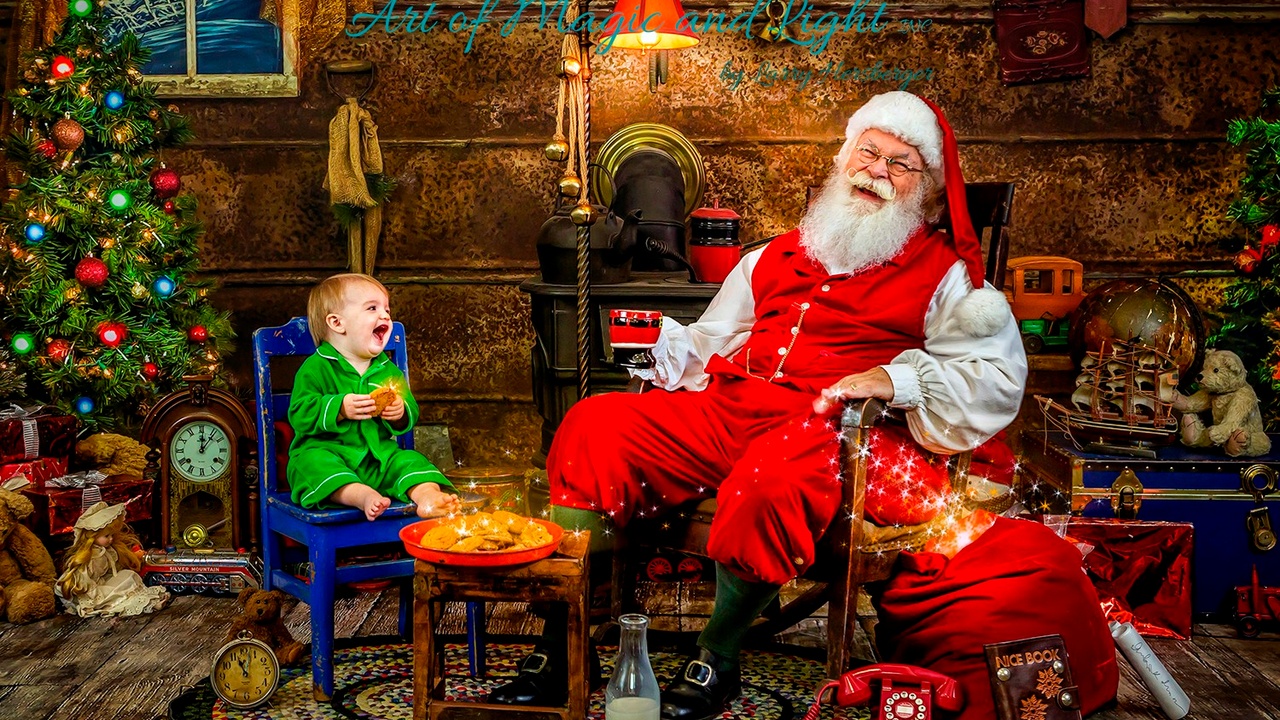 Why do so many people around the world love to have their pictures taken with Santa Claus? There are numerous reasons, all of which every professional photographer should know and understand.

First of all, we live in a society where Christmas is, by far, the most important retail time of the year. Every business ramps up for Christmas and each year it starts earlier and earlier. Other than the obvious and very important religious connection of celebrating December 25 for the birth of Jesus Christ, the other reason is in short “retail sales”. 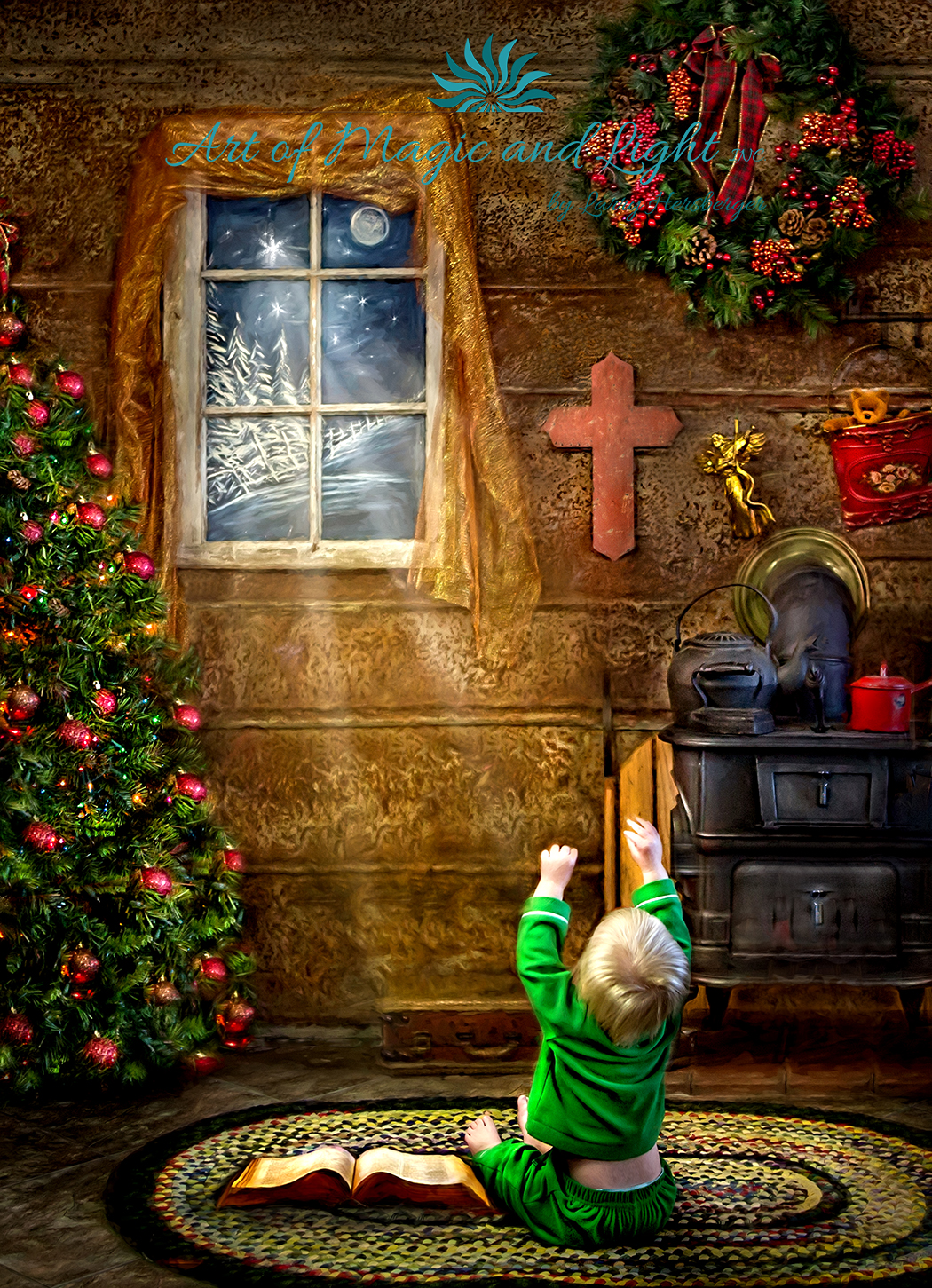 This alone, should be plenty of reason for any photographers ears to perk up and pay attention. A leading statistics company, Statista, shows that the Christmas quarter of sales can be as high as 40% of a company's gross revenue. In some cases it is even more.

Then there is Santa, who is a towering figure in folklore and legend. I will venture to say Santa Claus has no second when it comes to legendary characters. He is one of the most loved and marketed figures on the planet. Again, another reason for photographers to take Santa photography seriously. 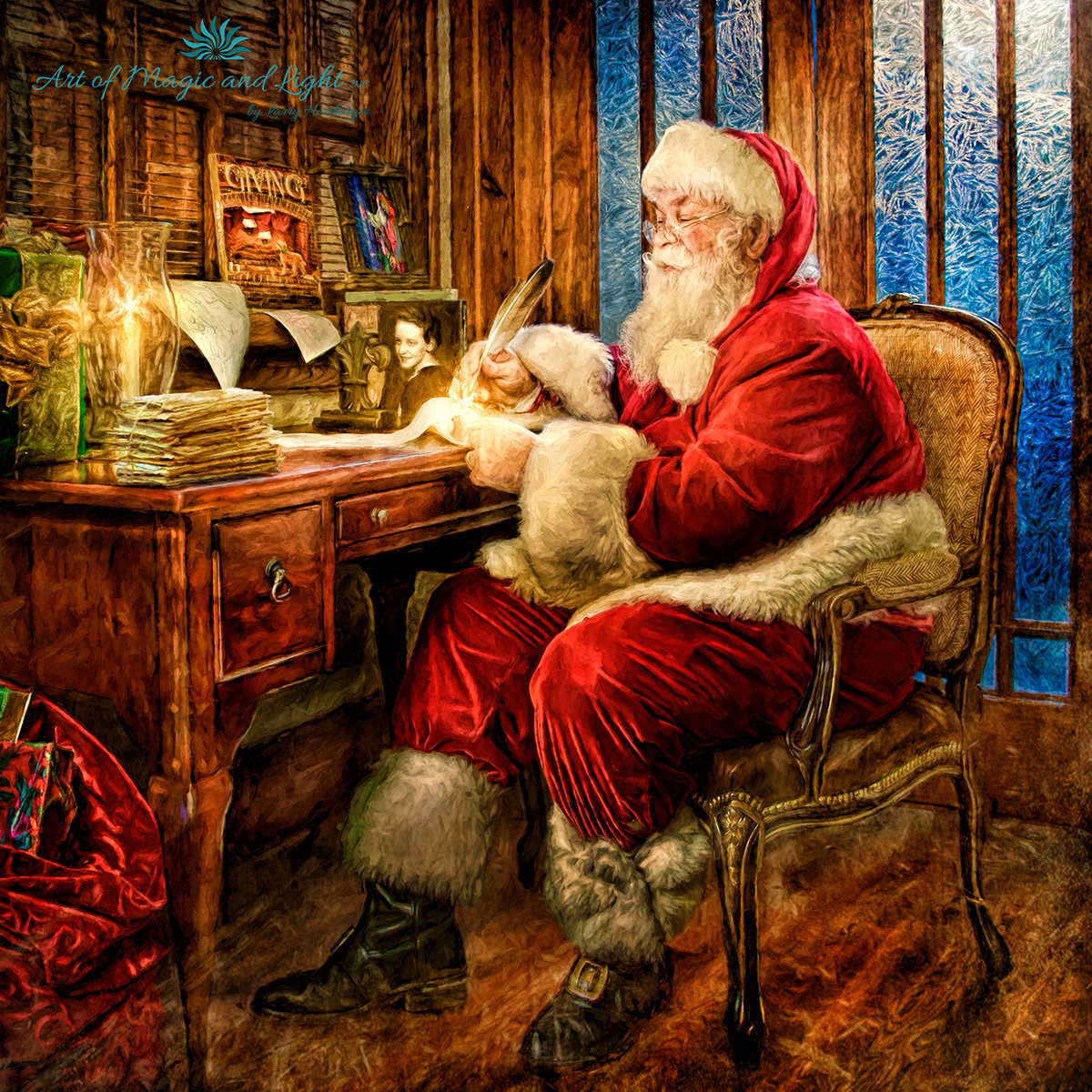 Santa Claus also stems from a dearly loved real person, known as St. Nicholas. His kindness and giving ways were legendary and have withstood the test of time. To know of this connection and meaning is yet another reason, as a photographer to look at creating serious art featuring Santa and children.

Of course then there is the legend of Santa himself. He is loving, jolly, giving, caring, magical and so on. Did I mention that Santa Claus can make reindeer fly? Not that will make you stand out in the school yard.

So yes, all things Santa Claus are very cool, extremely loving, giving and quite profitable. It seems as though for an industry completely reliant upon visual storytelling and stimulation, one would think that every studio would be doing high end Santa photography from July 1st onward.

For the most part, since cameras were invented and professional photographers arrived on the scene, this has not been the case, until very recently when photographer Larry Hersberger noticed something very unusual.

Studios across America and Canada had been doing Santa Pics the same way for decades.

They would book a Santa for a weekend, and run as many children through as they could on that day or weekend...and that was it for the year. 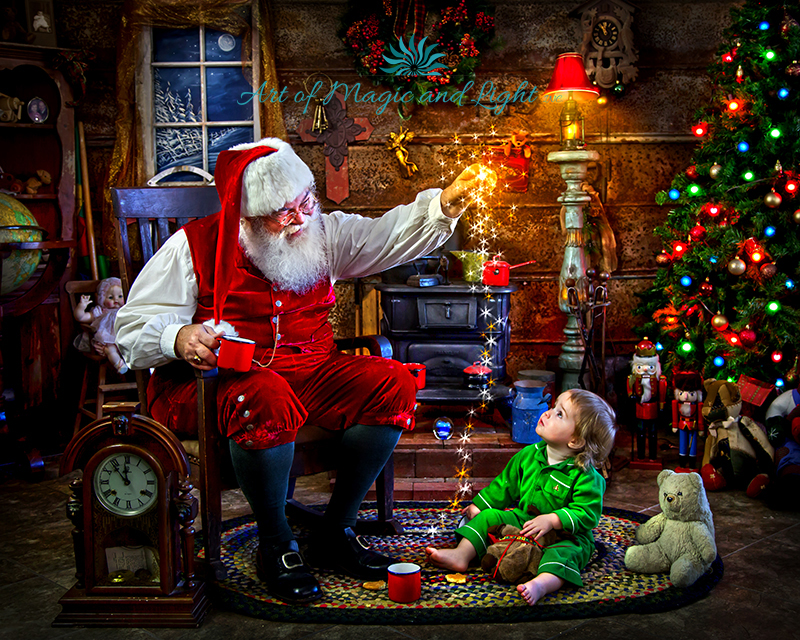 These became known and branded in the general public as Santa Pics. They were fast and inexpensive and for the most part very basic photos with a child and Santa. The session was not more than a couple of minutes or as long as it took for Santa to ask the child what they wanted for Christmas, then a smile for the camera from Santa’s knee and viola, Santa Pic.

He grew up loving Santa and thought of him of this majestic and magical person and was bound and determined to catch him delivering gifts one Christmas. He had questions for Santa. How do you make the reindeer fly? How do you get down the chimney when you are so big? How do you travel the world in one night...and so on.

To Larry, Santa was pure magic and he made everyone happy. He brought gifts and never asked for anything in return. Larry was sure to always leave him a gift and he received it for each and every Christmas morning, it was gone. 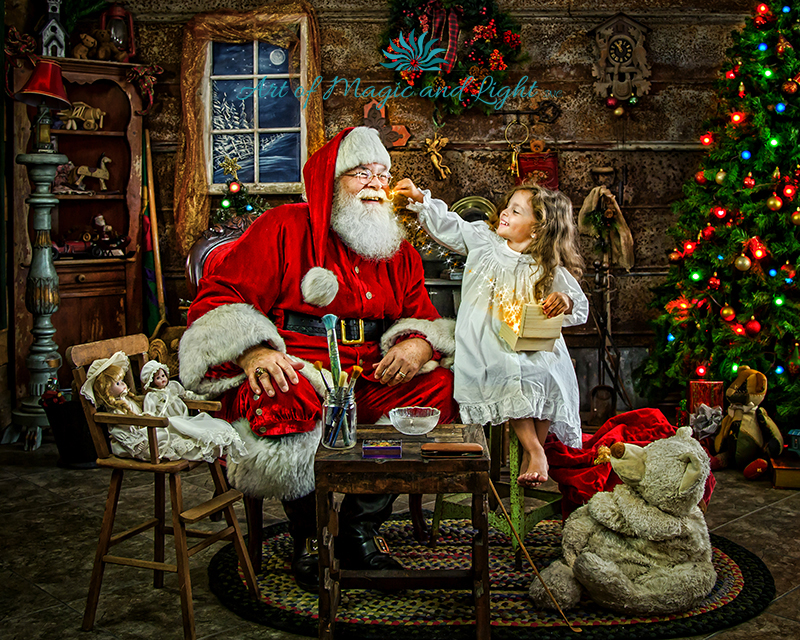 In Larry’s mind Santa was to be revered and respected. There were stories of Santa, movies of Santa and songs about Santa. Santa seemed to be everywhere from books to stores. Now Larry was a professional photographer and under no circumstances was he going to minimize Santa’s prestige nor his majestic presense. 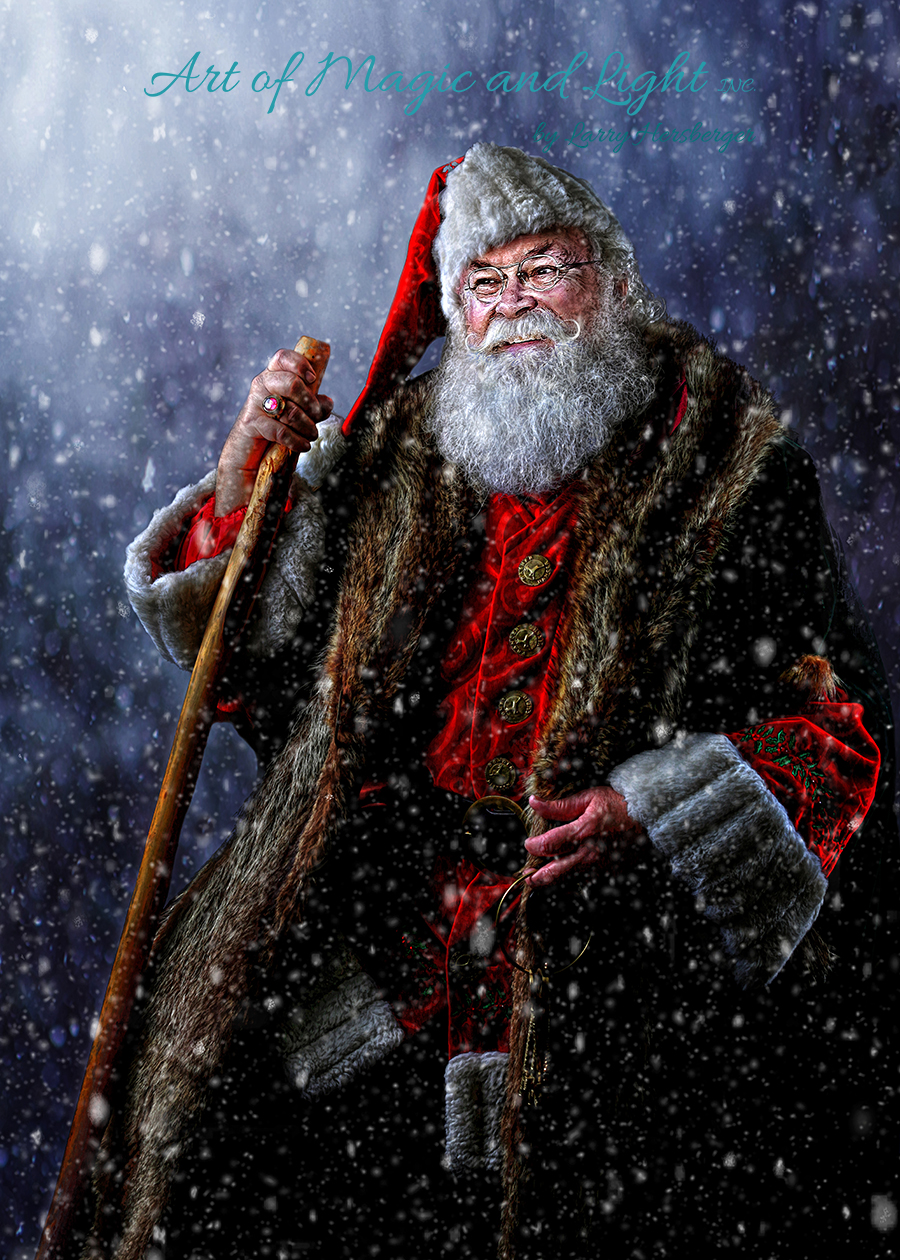 I also failed to mention that Mr. Hersberger is also an artist. He had been drawing and painting since childhood. This was and is, a God given gift. With these skills, combined with his photographic prowess, Larry set out on a course to create something that no person had ever seen. Fine Art Magical Santa Photography and Art was born.

It is always interesting to see creation happen. There is an unmistakable fragile nature to it. What is in the artist/creator's mind does not always come to life. It sometimes stays only as a dream. The artist must have the knowledge, ability and willpower to let it out and see it come to life. The artist fearlessly creates, no matter the cost.

This is how Magical Santa Photography began. Larry saw Santa Claus in a very different way that he was being portrayed in the photographic world. He was dear to the hearts of children and to the inner child of every adult. There was a warm, kind, loving and Godly feel to this majestic and magical character of folklore. 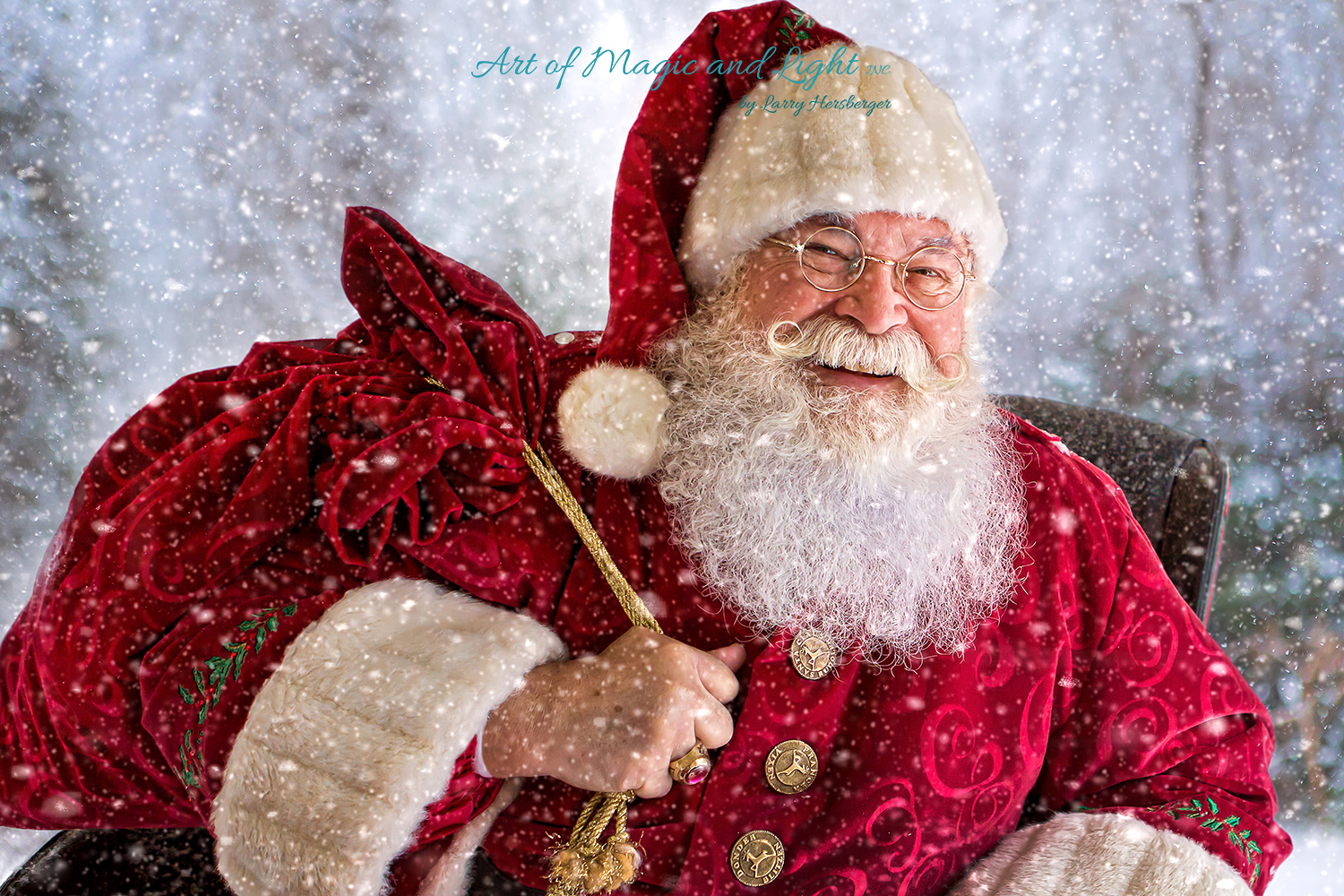 There was more to Santa Claus than just being on a Santa Tracker or having a child sit on his knee and smile at the camera. There was a nostalgic story to be told. Santa needed to be portrayed in an elegant, magical and beautiful way.

Larry made it his goal to portrait him as such. As a master set designer, he began the journey to bring the “real” Santa to life. This would be the Santa that, when eyes were closed and every child or inner child pictured Santa, everyone would envision.

I ask you to try this and tell me he was wrong. Close your eyes. Now picture Santa in your mind. Who do you see? The jolly, laughing big fellow in a red suit with a huge bag of toys. He may be in his sleigh or coming down the chimney with his red hat, big belt and buckle and black boots. His beard is white and he is only in your mind for one reason...to bring presents and kindness. 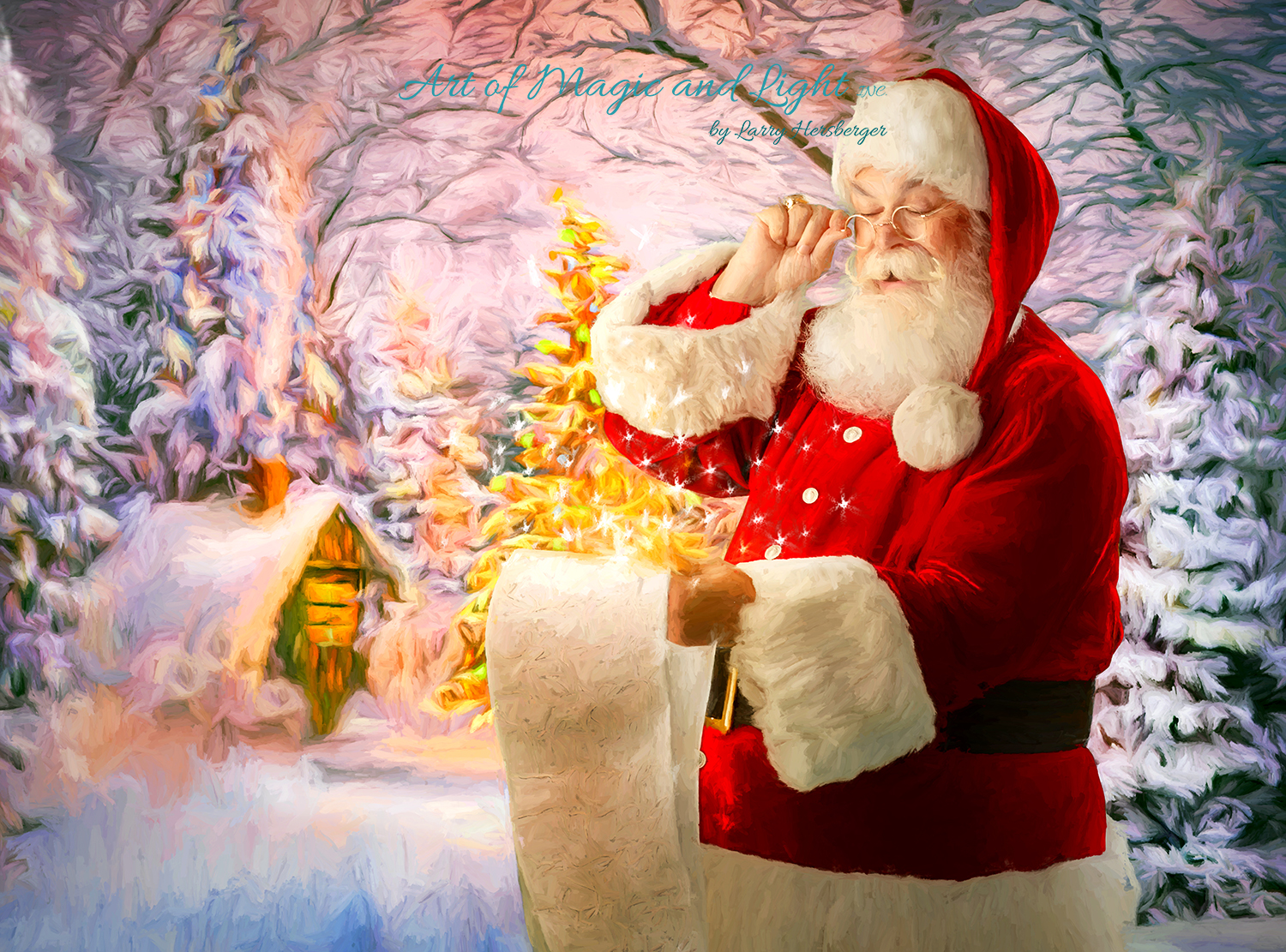 Once Mr. Hersberger had the first workshop set created, an amazing Santa emerged, Santa Cliff Snider, who would become Mr. Hersberger’s muse. As a master photographer, Larry would develop a method of lighting, propping, posing, composition that created a story not only within the image but in a series to create outstanding children’s storybooks. He would create sessions with children and Santa.

Each storybook became that child’s own dream on Christmas eve.

Now that child would actually become part of folklore. As Larry was also a writer, he set each book to poetry. It was magical. Now a grandmother could read the story of Santa on Christmas Eve with their own grandchild as the lead character.

It was as Larry (or Little Larry...his inner child) had pictured it. He was seeing his vision of Santa come to life, but there was something missing. Santa was magical to Little Larry and this needed to be a feature of the art.

Being proficient in digital art, Mr. Hersberger, ever the artist and creator, began the next journey...creating realistic magic. Larry has a saying, “The story and the art must look like it is actually happening.” This was his goal and soon a truly magical and nostalgic Santa was born. 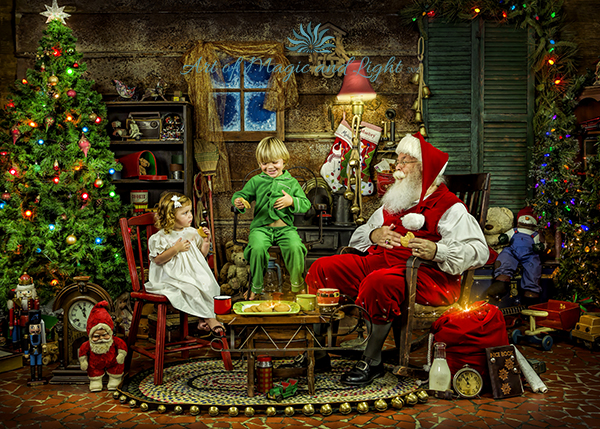 Soon people were traveling from across the nation and then around the world to have their children in Mr. Hersberger’s art.

Of course many other photographers and artists began to take notice and the era of Magical Santa Photography was at hand.

Today Mr. Hersberger continues to create in his studio in Odessa Florida. He now has many nostalgic characters under his belt and Little Larry still has countless ideas in Larry’s head. Fine Art Magical Santa Photography will always be close to his heart.

Yes, Santa will always be special to Larry, and profitable to his business. Larry makes his living as an artist and understanding the business side of art is just as important as the art itself. He has always believed that if one can make a living as an artist, it will allow for a lifetime of creation.

Larry’s message for other artists and photographers, is to embrace Santa, Christmas and storytelling. Make this part of your studio’s art and product lines. It is what every retail business does. It does not have to be cheap, goofy or slapstick. Santa and every character of folklore can be nostalgic, magical and please every child and inner child. 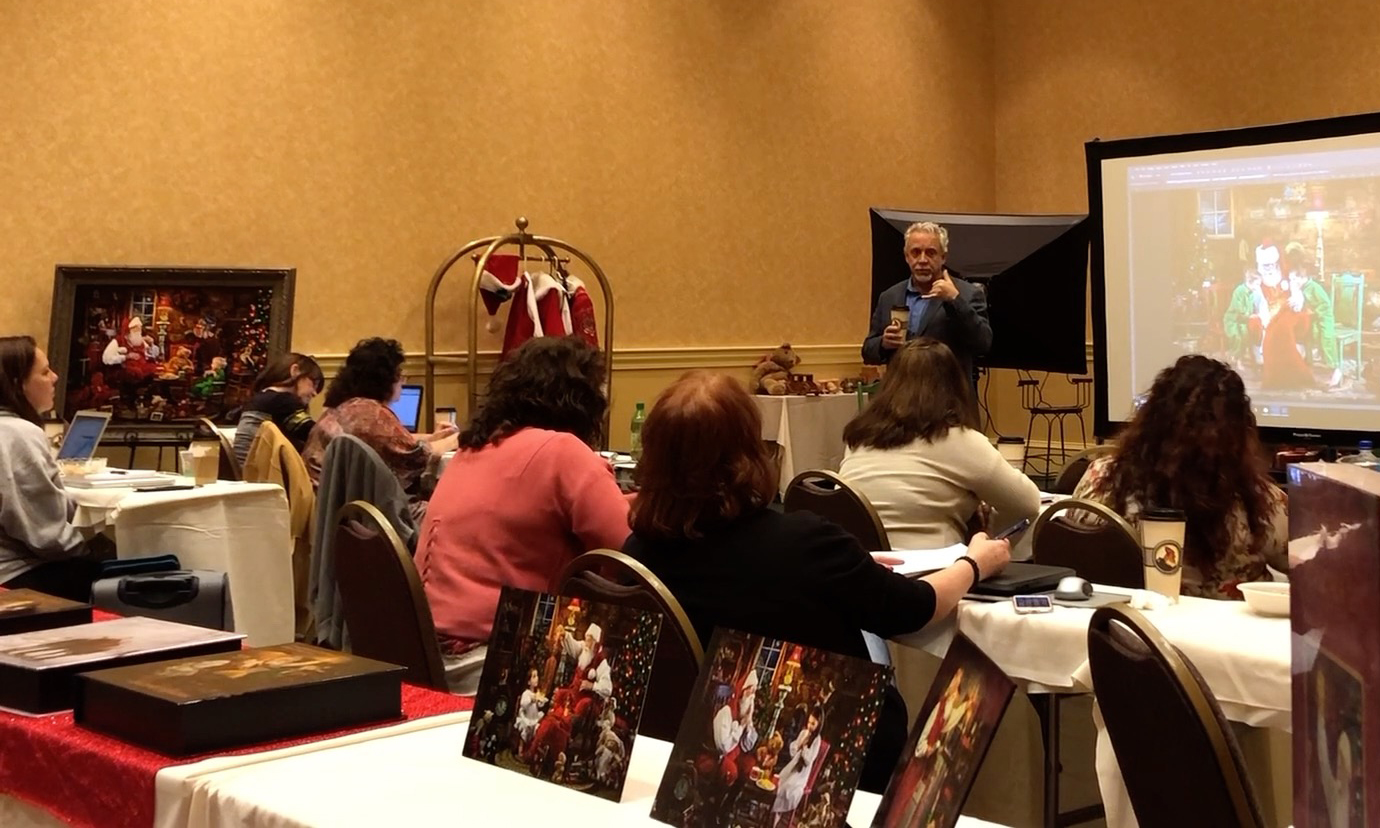 He welcomes every photographer and artist to learn with him and share in his workshops and teachings. Teaching fine art Magical Santa photography is a passion of Larry’s and his courses are easily found online at www.artofmagicandlight.com

You will not find an educator who will give more of himself when teaching than Larry Hersberger. He truly wants to see you succeed in art, the business of art and in life. Fine Art Magical Santa Photography is certainly on the rise and Larry is excited to teach you.

Today Larry and his talented fiance Ela Bednarek, live in Odessa Florida where they own and operate Masterpiece Artwork. They are both professional photographers and outstanding oil painters. They have three children, one hamster, a garden, infinite love and a whole lot of creativity.

CHOOSE TO BE A PHOTOGRAPHIC STORYTELLER AND STAND OUT IN YOUR COMMUNITY
photographic storytelling
Modern Photography can still be Nostalgic.
modern santa photography
How to create Magical Santa Pictures
Close